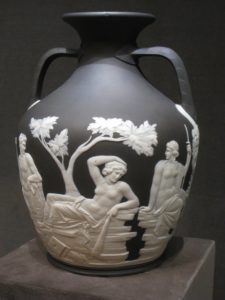 History of the Wedgwood Portland vase begins with he original Barberini Vase, probably the most famous vase ( made about 50 B.C. of glass) and the finest example of Greek cameo-glass in the world was acquired from the Barberini family in about 1780 by James Byres.

It was sold to Sir William Hamilton who disposed of it to the eccentric Duchess of Portland. Two years later, following her death, it was bought in, at the auction of her collection, by the third Duke, Within three days it had been borrowed by Josiah Wedgwood who had obtained permission from the new owner to make replicas of it in Jasper.

For the next four years Wedgwood, his son Josiah II, Henry Webber, and William Hackwood were constantly employed in experiments with the jasper body to arrive at the particular deep blue-black of the original glass, in preparing working drawings of the vase, which must be returned to the Duke within twelve months and in making models of the cameo relief subjects.

After many trials and failures, the first successful copy of the Wedgwood Portland Vase was finished in October 1789. The first edition of copies for subscribers and for presentation to patrons, friends, and museums was begun in 1790. The fifteenth copy, admired by Queen Charlotte, was submitted for expert opinion to Sir Reynolds.

On the 15th June, 1790, he gave it his certificate: I can venture to declare it a correct and faithful imitation both in regard to general effect, and the most minute details of the parts.

There is not any certainty about the numbers of copies made by Wedgwood in his first edition, the production of which included a small number in slate blue and continued for nearly forty years.

There were several later editions, for the most part remarkable only for their clumsiness and lack of all but s superficial resemblance to the original. For the 1839 edition, in deference to a public taste zealously guarded against the spectacle of frontal nudity of whatever classical respectability, the figures were draped, an addition which does nothing to disguise the coarseness of the modelling.

Other editions since 1880 included various sizes in all colors, the latest being a small quantity in solid green and white jasper in 1957.

Whether or not one regards the Wedgwood Portland Vase as an artistic masterpiece, the quality of the cameo-cutting is of the finest; nor can there be any doubt that while the triumph of Wedgwood’s invention was the creation of Jasper, it was in the production of his copies of the Portland Vase that he reached the peak of that triumph.