Jasperware (also known as Wedgwood Jasper) is a type of stoneware invented in 1774 by Josiah Wedgwood, a prominent English potter. He discovered the recipe for jasperware clay after experimenting with different types of clay for years, and kept the recipe secret for the rest of his life. Jasperware is considered unique among historians due to the fact that its discovery single handedly brought about the mass production of stoneware.

Artists admire jasperware because of its smooth texture, lovely matte finish, and often gorgeous colors, such as the famous “Wedgwood blue.” Jasperware is really almost a kind of porcelain (and is classified as such by some experts), and this helps explain its fine grained appearance.

Shortly after discovering how to make jasperware, Wedgwood went into business and started producing it in large quantities from a factory based in Staffordshire, England. In order to confuse potential competitors about the ingredients he used, he had the minerals for his clay ground in London, and then brought to Staffordshire in powdered form.

To discourage corporate espionage, Wedgwood ran his factory in such a way that no single one of the workers had a complete understanding of the process for making jasperware. By dividing up factory tasks and forcing his workers to become extremely specialized, Wedgwood easily prevented all of them from becoming competitors. 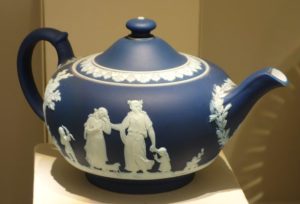 After Josiah Wedgwood’s death, his son took over the family business and it remained in the family until well into the 19th century.

Modern chemical analyses have revealed the secret ingredient of Wedgwood Jasper: barium sulphate. It is likely that Josiah accidentally stumbled on the use of barium sulphate. Barium sulphate plays a number of key roles in the formation of proper jasperware. Barium sulfate improves the elasticity of clay, and it also contributes to the special finish jasperware pieces tend to have.

Antique jasperware pieces are popular with collectors, and a variety of objects were made from jasperware in the 18th century. Josiah Wedgwood was a famous abolitionist and mass produced cameos with the inscription, “Am I Not A Man And A Brother?” for abolitionist groups. The image of the black man in the cameos is probably the most famous artistic depiction of a black man in the 18th century.

Jasperware based art probably reached its zenith in the 18th century, but the material continues to inspire artists and collectors to this day. Without the lovely jasperware relics contained in art museums, art lovers would be deprived of some of the most sophisticated English art to date.